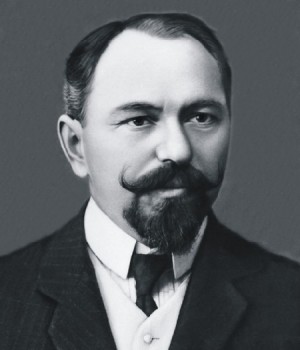 Let's meet another inventor who has made a considerable contribution to the progress of humanity, being part of the great scientific values ​​of the world.

In the universal scientific vocabulary are found expressions such as: Karpen cells, Coanda effect, Teclu bulb, Procopius phenomenon, and the examples continue, these expressions represent the recognition of the results of the scientific activity of these famous ancestors.

A personality that must be recognized and honored is Dragomir Hurmuzescu remarkable physicist, inventor and teacher, founder of the Romanian Academy of Sciences.

During the reign of the Romanian state AI Cuza, on March 13, 1865, Dragomir Hurmuzescu was to be born. In the high schools in Bucharest, Sfantul Sava and Mihai Bravu were to be laid the foundations of his education (he completed his baccalaureate in 1884). At the University of Bucharest, inaugurated in 1869, he participated in the courses of the departments of natural and physical-mathematical sciences, graduating them in 1887. The bachelor's thesis in physics held at the Sorbonne in 1890.

He prepared his doctorate in the physics laboratory where he worked at the Sorbonne. The content of the doctoral thesis On a new determination of the ratio between electrostatic and magnetic units is appreciated because there was at that time a special interest in international scientific circles.

He returned to Iasi, where he was appointed associate professor, and later professor at the University of Iasi, Department of Gravity, Heat and Electricity (1898). He also edited the Scientific Annals of the University of Iasi. Due to his sustained activity, between 1904 and 1907 he was part of the government, having the position of general secretary at the Ministry of Public Instruction.

Being internationally acclaimed, he presided in 1910 in Brussels with the Nobel Laureate - Marie Curie and the physicist Becquerel, a section of the Radiology Congress.

The move to Bucharest follows, where he receives important positions at the University, that of professor, dean and vice-rector. The Romanian Academy received him among the immortals in 1916 as a corresponding member. He is one of the founding members of the Romanian Academy of Sciences, and in 1922 he became president of the Radiotelephone Broadcasting Society.

The electroscope is an instrument that is able to detect the electrical charge with which a body is charged.

Today we know how to build electronic electroscopes, which are even more sensitive than the sheet electroscope. Electron microscopes can immediately identify the type of charge detected. Because it is designed to detect electric charge remotely (without contact with the electrified body), this electric charge sniffer has been called "sniffer" in English.

Sniffer samples are used today in the analysis of RF signals, as in the movie below:

Dielectrine is an insulator based on a mixture of sulfur and paraffin.

Together with RJ Benoit, he demonstrates that X-rays discharge ionized bodies, and the air becomes a good conductor of electricity by X-ray ionization. He conducts numerous studies in the field of water and oil radioactivity in the Slanic Moldova area.

Supported by his collaborator Eng. Emil Petrascu, at the School of Electricity at the University of Iasi, which became the Electrotechnical Institute in 1913, he founded an award-winning radiocommunications department both in the country and in Southeast Europe.

Enjoying sympathy and appreciation, he was supported for the establishment in Bucharest of an Electrotechnical Institute where in 1925 he started the first experiences regarding broadcasting, but also began to make public broadcasts. It was only in 1928 that the inauguration of the Radio Bucharest station succeeded.

In parallel with scientific research

In parallel with scientific research and laboratory experiments, he publishes a series of papers that receive special appreciation. Some of these works were also published in French in the French capital, such as: The mathematical theory of light or Dielectrine - a new insulator, The new electroscope - new electrical appliances, but most of the works were published in Romanian, these being printed both in Iasi and in Bucharest. Other titles of works: Science development and social progress, The future of the Electrical Industry in Romania, General and applied electricity etc.

Dragomir Hurmuzescu was also a great popularizer of science and technical applications, being present with articles in specialized magazines, such as Radiofonica, or giving lectures in front of students or in front of the general public, but also in front of the microphone.

It was established under his presidency General Association of Amateur Radio in 1931, this being known by radio amateurs in Romania.

Esteemed, appreciated and respected for his contribution to the development of science and the application of technical conquests for the benefit of the people, the dean of Romanian physicists as he was named, Professor Dragomir Hurmuzescu died on May 31, 1954.

Other educational materials about electronics and more ..

Did I help you?
I am very glad!
If you want, you can thank me for a coffee!